I'm not normally a person who gets a great bargain with things. Today I had to trawl the shops to find an old style pair of PJ's for my son to wear in his production next week. You know the sort, your grandad would wear them if he had to go into hospital. I could not find a pair anywhere and so ended up in the charity shops. I still had no luck with the PJ's but found a complete bargain for my older son, who loves books and X files at the moment!! 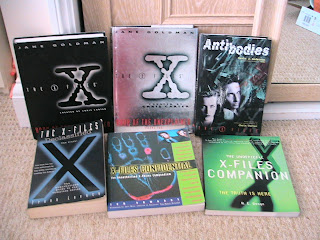 All these ( 3 hardback and 3 paperback) for a grand total of £2.90 !!!!!
And believe me he is a happy bunny today reading through these after school.

CONCLUSION: I might just be popping into the charity shops more often.

My youngest though does not start back to school until tomorrow so he came to the shops with me, mainly as a bag carrier, but he found a pair of boxer shorts that he really wanted, Top Gear no less! Even they were a great bargain at £3, so I decided to treat him as he was being so helpful with the bag and above mentioned book carrying!! 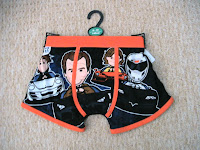 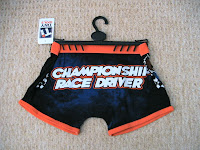 He was so chuffed as tomorrow is PE day and he will be able to be 'bustin low' with his new boxer's!!
What the hell is that I hear you cry!! Well apparently that would be showing the top of your underwear with your trousers hanging low...................Bloody hell the thought of my scabby pants showing to anyone is enough to bring on an anxiety attack for me, but he tells me it's the fashion!!!!!!