Tilly the Terrorist ( as she has become known by the neighbours). 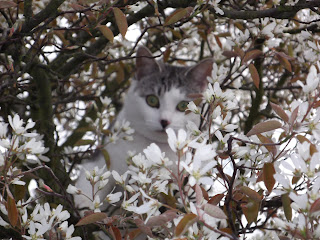 Please do not be fooled by the cuteness ( I know it's hard but stay focused here), she terrorises the neighbours 4 guinea pigs! She stalks and chases next door's 2 cats from their own garden so she can sun herself on their 'sun drenched' doorstep! She stalks the poor unsuspecting tortoise in the next door neighbours garden ( other side) and I often hear it scrabbling along the fence trying to hide in a safe place. The garden next to that has actually removed their bird table as she was eating all the bread they left out, while all the time we were feeling sorry for her as she wasn't eating her own food very well!!!!!

We have brought in our own 'Zero Tolerance' Anti Terrorist Squad...... 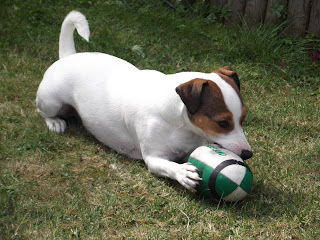 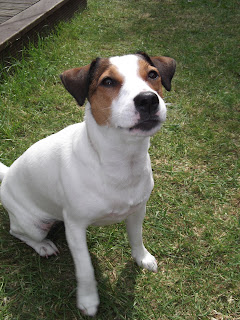 This came in the form of my brother's cute but lunatic dog called Scully!!!!

She arrived Thursday ( as my mum and brother came to stay so they could see my youngest in his play) and Tilly scarpered never to be seen for the rest of the day.

She either retreated upstairs and wouldn't even come down for food or she disappeared outside and would not come back to the garden!!!!

Which only reinforces the old saying, which I firmly believe in.........