Today my youngest headed off to school early, just so excited to be going on his 3 day School trip. Although he has been away camping before with cubs my OH has always gone with him. This time he was given the choice if he wanted one of us to volunteer to help on the trip.

'No offence' came the reply ' but I want to go and enjoy myself'!!! Says it all really.

So after a hectic day yesterday ( see previous post)we started to gather his kit together on the bed, checking it off the kit list as he went. He's actually very organised for a 10 year old. At the same time he;s very picky and so we had disagreements over the towel he took, how many pairs of shoes/boots were actually needed, the necessity for spare clothes and the fact he would actually have to change his pants!! 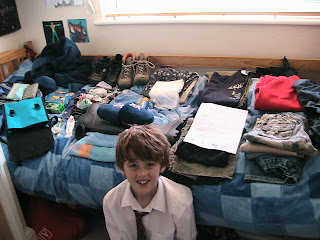 Eventually we mutually agreed that the stuff you can see on the bed would suffice.


Surprisingly he slept well but was up at the crack of dawn washed, dressed, had breakfast and brought his bags downstairs. Wonders will never cease and I will remind him of his quickness next week when he suffers from 'sticky mattress' syndrome.

He wheeled his own bag to school and sorted himself out with what he had been told to do by the teachers........I was shocked at the fact he can actually, when he wants to, do what he is told.

We all waited for them to start getting on the coach and I was pleasantly surprised that not only did he look in my direction, but I got a wave too. Even more surprised when he waved and blew me a kiss from inside the coach!!!! He does love us after all.