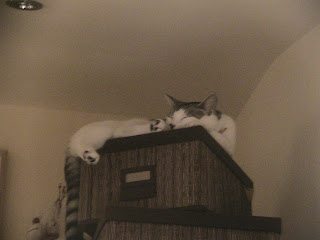 Our little cat is a total cutie pie. She has just turned 1yr old and has trained us to get exactly what she wants on her terms! We just can't resist the angel face.


However, we cannot work out whether she is incredibly brave or just bloody stupid. She manages to scare next door's cats ( who are trained killers themselves) out of their own garden! And then will lay basking in the sun on their doorstep whilst they can only look on from afar.

But she has completely outdone herself this time when my neighbour called, slightly panicked, saying she was on the roof. Initially I was thinking 'big deal she always sits on the kitchen extension roof- so what', but no she meant the real roof ( and we have a loft extension which meant 3 storey's up). Apparently she clambered up via the neighbour's pebble dashed chimney stack!!
LIKE I SAY INCREDIBLY BRAVE OR BLOODY STUPID.......I suspect now it's the latter.

She is back safe and sound but the experience has changed her due to the fact that when she was on the fore mentioned roof she realised there was a whole other world out the front door!

So getting out has become a well organised, executed with military precision, life or death mission.

I think I preferred it when she was just terrorising the neighbours pets!!
Posted by mum in meltdown at 09:15