Yep, that just about sums up my weekend.

It all started Friday evening when I was feeling rather sorry for myself as I WAS NOT going to the big Cybermummy 11 party. So the self wallowing set in and a post was written to try and make myself feel better...........see previous post Cybermummy 11....I wish!

Anyway I soon got over that (fickle I know) on Saturday, as I organised my eldest son and OH as they were heading to the Hard Rock Calling Bon Jovi concert in Hyde park. They eventually left armed with enough food and drink to feed a small nation!


So it was just me and my 10 year old, and we had our afternoon/evening planned. He was going to practice his 'Consider Yourself' song for an Oliver audition he was due at on Sunday and his LAMDA poem for an audition on the same day for a Jungle Book production. Once that was done it was going to be homework and then we were heading to the shops to get some treats for our movie night, which we had decided to watch Mission Impossible 2!!  You can tell we know how to live.......NOT.

We had several calls from my OH and son from Hyde Park updating us to who was on stage and giving us a listen and we promised to tune in to the radio as they were playing the whole concert live without interruption. And we both felt more than a pang of jealousy as the crowd went mad as Bon Jovi appeared on stage, but we were happy that hopefully the boys were going to have  a great time. 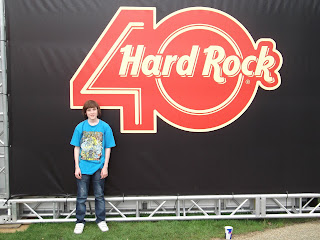 Anyway that's when the above mentioned plan went to pot!! First of all we were enjoying our treats ( flake ice cream and Pringles....not at the same time you understand) while watching our film. We were about half way through (the film not the treats) when the dvd decided to freeze!!! Not a problem said my 10 year old sometimes this happens 'I know how to sort it out mum' he said. Great lets get it sorted and get on with the film.

No, it was not to be, there were gremlins in our dvd player who really didn't want us watching the rest so we couldn't get the bloody thing to work!! Please tell me we don't need a new machine...I can't face paying out for anything else.

So anyway we tuned the computer into the radio station to listen to the concert for a while and then I noticed my son had been, and was still eating the pringles!!
'That's probably enough or you will end up being sick' a true mummy saying came out of my gob before I could stop myself.

So the rest of my evening was filled with cleaning up poo and puke complete with Bon Jovi playing in the backround! ..........us mums get all the best jobs!


Eventually he managed to settle into bed with a bucket and a huge towel placed beside him just in case. And low and behold he went to sleep.

That wasn't long before My OH and son called me to listen to the live 'Living on a prayer' being sung with their dulcet tones helping of course. Which was the highlight of my very sad night as I loved hearing my 13yo singing his heart out to one of his favourite songs ( he doesn't tend to show to much interest or excitement with anything, so it truly was a rare occasion).


Anyway the wanderers returned and told me all the gossip from their adventure. This was somewhat overtaken by the fact that my house now smelt of a badly run old peoples home! Poo, puke and pine disenfectanct can have that effect!!!  ( Oh yes I've watched those damn undercover NHS/ care home programmes to know what 'smellovision' would be like)

But it didn't stop there.....Oh no it went through the night. We were woken up suddenly by my youngest saying he had been sick again, so gracefully my OH said he would go. BIG MISTAKE

I thought by the noise of the retching that my son was being sick all over the place so I rushed downstairs to find a great sight................my OH in his boxer's retching as he is trying to clean up the puke which this time made it's way all over the toilet, down the walls, onto the floor and into the hand basin!!!!!!!!!!!!  ( I know too much information...sorry)

God knows where it all came from! Anyway sent him away in disgrace whilst I cleared up........again the mums get all the best jobs. Then I found my son up in my bathroom with stuff coming out of the other end which had made it's way onto my cream carpet!!!!!! AAAARRRRGGGGHHHHHHH!!

ONLY A MOTHERS LOVE STOPPED ME FROM KILLING EVERYONE!!!

Don't worry I have spared you from any pictures as I do not want to be held responsible for a nationwide 'mexican puke' wave crossing the country.

Today he has recovered slightly and is able to keep very bland food in, in small doses...thank god as I was going to have to make an emergency trip to stock up on everything anti bacterial that I could lay my hands on.

However, he has had to miss two auditions today ( damn them for being on the same day anyway) which he is not a happy chappy about........he takes his acting very seriously!

So there you have it. A typical weekend in our household where nothing really goes as we plan it. I'm sorry the excitement here cannot match that of all you Cybermummy peeps ( I've been following on twitter you know) but I'm quite sure this was one party you wouldn't want to be part of!!!!!

So definitely going next year if only to miss the S**T, PUKE and ROCK'n'ROLL.
Posted by mum in meltdown at 14:01