That would be how many stamps my teenager collected, with help from his scout group, as a fundraiser for London Air Ambulance. That an 40 empty ( almost) ink cartridges!!

I know this to be exact as we have just spent the afternoon counting them........yes this is the point that you have to feel sorry for me now please.

It really was one of those jobs that we have actually put off for the past few weeks. But today there was no excuse we could use. My son's end of year tests were over, my OH was at work ( lucky bugger), and it was absolutely p**sing it down, so there was no chance of getting distracted outdoors!! 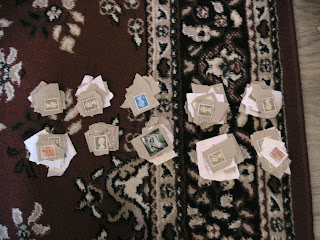 However we really didn't realise how long it was going to take. We started at around 3ish and the boys continued until they went to bed!! Then it was over to my OH and myself ( thank God he had come home by then).


Now we have to just arrange to get them up to the Air Ambulance. My son is hoping to be able to get a picture with the helicopter or maybe if he is lucky, he might even get to put his bum on the pilot's seat!!!
Posted by mum in meltdown at 15:29