WARNING:   This post may contain lots of unnecessary 'parental proud gushing' on several occasions so readers of a nervous disposition  may find the content too disturbing to read!!

Yes we are a very proud family indeed. My youngest son won the Young Players Trophy at the Kent Drama Association Awards on Saturday evening for 'Best Young Player'. It was for his acting role of 'Douglas' in the Hayes Players production of 'Shadowlands' ( film buffs will remember the film version one for Antony Hopkins as CS Lewis). My son played an American boy who is the son of the lady that Lewis falls in love with!

He was nominated by the adjudicator along with 2 others ( who I might add were 17ish years old!) who had taken part on other productions. Those 3 had been selected from 19 plays that had taken part in the festival. So to be nominated was a fantastic result anyway.


Anyway, we had to dress up and head out to Whitstable where the Oscars awards were going to take place.

Once there, we mingled with all the other nominees whilst drinking posh fizzy stuff ( well coke for him anyway!) and generally checking out all the competition and wishing everyone luck in true 'luvvy' style.


Then we were ushered into the little theatre were the awards got under way.We had 10 of us from our production including our nominees for 'Best Actress', 'Best Supporting Role' and 'Best Actor' ........see I told you just like the Oscars!
My son category was the first of our nominees to be awarded ( and that was about half way through the ceremony itself). As it got closer I became more and more nervous for him. We had really gone with no expectations as we knew he was up against much older actors with more experience, so we really went for the jolly.
The adjudicator did a detailed chat of all the nominees for each category before announcing the winner. As he spoke about my son I couldn't believe the fantastic things he was saying. He spoke about him and his acting as though he was an adult and did not mention his tender age at all.

I am in so much shock that it only hits me as I see my son walk up onto the stage to get his trophy and certificate! The rest of the group are cheering and clapping just as proud as I am, however I can only manage to wipe away my tears ( typical bloody mum thing to do!).

The play itself went on to win 'Best Actress', 'Best Supporting Role' and the director got Runner up in her category. The play overall came 4th out of 19 productions!!!! We were all pretty speechless but loved every minute of it. 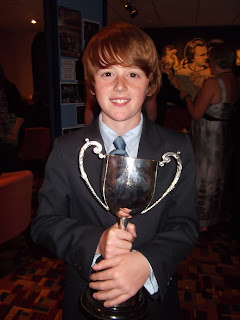 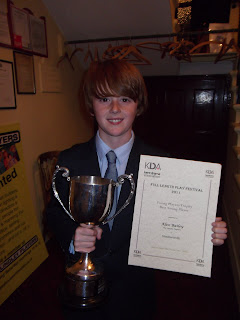