So that's week 2 of summer hols gone and we survived again, although kids arguments and petty nit picking (not literally) almost got the better of us and nearly tipped us over the edge!! However, all four of us are still in one piece and miraculously still talking............only just!

We decided pretty last minute to make use of MIL's caravan along the North Kent coast for a few days. We arrived Wednesday in glorious sunshine, unpacked, had lunch and then headed to the beach for a while before attempting a food shop with the boys (honestly you would think they would get better as they got older........do not be fooled). After dinner the evening was still lovely and warm so we headed down for a last walk along the local Leas, and as the boys took their skateboards they were well worn out when we got back to the van.


However we were undeterred and played games until the afternoon, who would have thought that playing Bingo and Charades for sweets could be so much fun..........honestly, what a giggle we had!


Then when the weather cleared we thought we would have a mooch around the local shops and check out the docks to watch for the enormous 'tanker' ships coming out!

Friday we headed off to Whitstable and Herne bay for the day. We made an early start and had a yummy picnic on the beach at Whitstable watching the little sailing boats going in and out from the club there.


After a wander around and the biggest ice creams I have ever seen and eaten, a picture of which is on my phone for proof, but for some reason I'm having difficulty downloading!!! Anyway, we headed off to Herne bay for the rest of the day.

I love the pier and the pavilion at Herne bay and this time we decided to try our hand at a bit of crab fishing! 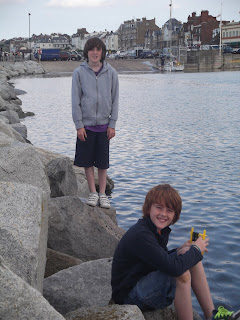 However we were not very lucky or the crabs knew something we didn't as we didn't catch a thing!! Next time I'm sure LOL


Saturday we drove down to a 'blast from the past' and visited our old RAF camp at Manston. There are two great little museums there, one mainly for the adults and one definitely geared towards children with aircraft they can climb about on and lots of other RAF stuff that brought back great memories for me and the OH!! We had a picnic overlooking the airfield and the old Air Traffic building I used to work in and we can see both our old rooms from the front of the camp ( our boys love this.....sad but true!)

However, the weather was not very kind to us that day and so we ended up in a very rainy Margate in the amusements, much to the boys delights.

By Sunday I was completely shattered and so a lay in was had by all!! It was also the 9th anniversary of my Dad passing away, so the day was never going to be brilliant anyway.We had planned to pop along to Leysdowne ( not the loveliest of places but the beach there is fantastic) to have a BBQ on the beach but the weather was grim and we contemplated coming home! But by the time we were ready it was like a new day...........sunshine.........hooray. So we took our chances, and so glad we did, we had a fantastic afternoon on the beach there complete with BBQ burgers for our lunch!


Although there was a small fair there, we had been playing Bingo in the van when it was raining so the boys opted to play the 'proper' bingo inside the amusements instead!! We had a blast for about an hour and 3 out of 4 of us had a win!! Sorry OH .........but you were rubbish.

Anyway we headed home for tea and a few card games before bed, and although we had a great day my 'sociableness' had worn off and I was glad to head to bed as we were going to leave fairly early the next morning.

So, today is now Monday and another week of the hols has past and so far we have had some great days. Yes there have been arguments, tiffs, tears, tantrums ( and that is just me!!) but overall it has been fab!

Here starts a new week, I have returned and unpacked, washed and ironed and re- packed as tomorrow we are heading to Devon to stay at my Mum's!! OH is staying here as he has to work. This will be the first time I have attempted to drive the journey on my own since being diagnosed with M.E!! I am not looking forward to it as I normally sleep for a few hours when my OH drives so not quite sure if I will make it!!